random thoughts on all things marketing and advertising

Five Ways to Leave Your Job on a High Note

Today I celebrate my 1 year anniversary at PGi. That went by pretty fast.  I guess time flies when you’re having fun.

Many of you who have read my previous blogs know that I was at AutoTrader.com from 2007-2012. I had a great run there and I personally feel a lot of pride in the b2b team I helped build and the impact we made across the organization. But, after five years in the same role I was getting antsy. I was looking for the next big challenge.

I’m sure many of you can relate to what I’m saying. Studies have shown that about 30% of people leave their jobs because they are ready for new challenges and opportunities. Sometimes, to get what you want, you have to leave. And it’s not an easy thing to do, especially when you work for a good company and you’re in a good situation.

I did feel a lot of guilt. I was leaving a team that I had a big hand in building from the ground up. I had just hired several new people, so I kind of felt like that college coach who recruits a bunch of top notch high school prospects and then leaves before the season starts. The company had also invested in me, putting me through several leadership training programs. In a nutshell, I felt like I was letting everyone down.

But, at the same time, this is my career and I’m the only person who can manage it. So, I found an opportunity that offered an exciting new challenge. And I resigned.

A former boss once told me that in any job you should always try to leave it better than you found it. That’s great advice. But too often I’ve seen people resign and then just check out for two weeks. You can tell that they’re counting the days until they start the new gig. Then after they’re gone you find they’ve left a complete mess.

The fact is, how you act during those last two weeks could have a big impact on how people view your overall contribution to the company during your tenure.

For me, I wanted to leave AutoTrader on a high note. I didn’t want the last impression of me to be of a guy coasting through his last few days. I wanted to finish strong.

So, here are five rules I followed to maximize the end of my time at AutoTrader.

So those are my five rules. What are some things that you do when leaving a job? 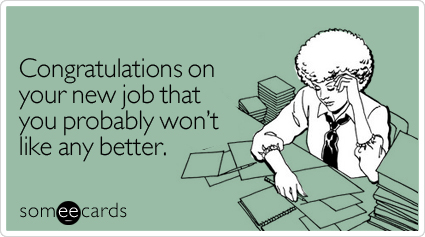 ← The Quick-Win Strategy
Reinventing the Demo →